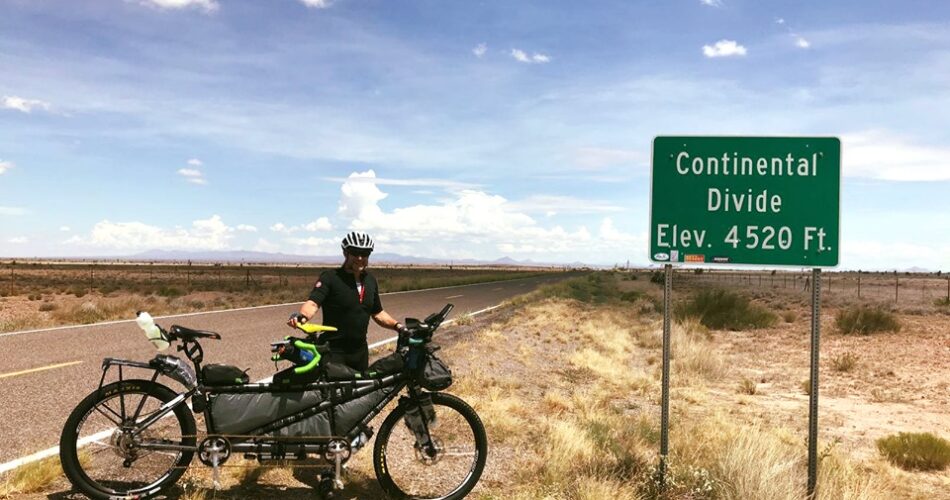 Normally a difficult and demanding task on a standard bike, some brave it on gravel bikes, others on mountain bikes, Andy and Sammy have chosen to make the adventure even harder for themselves by doing it on their Cannondale tandem and riding it South to North, self-supported!

We will be following Andy and Sammy on their adventure thoughout August and will do our best to keep you up to date on their whereabouts, as well as their achievements, hurdles and most likely their casualties along the way. Hopefully with some pics to give you an idea of the stunning scenery they will be pedalling through.

Some words from Andy prior to their trip:

“the 1st August I am due to attempt to ‘Ride the Divide’: The Tour Divide roughly follows the Great Divide Mountain Bike Route (GDMBR) which is a 2,745 mile off road Cycle route that criss-crosses the Continental Divide in North America 19 times up the length of the Rocky Mountains.

The Route for us starts at ‘Antelope Wells’, a border crossing in New Mexico and passes through 5 US states – Colorado, Wyoming, Idaho and Montana it then crosses into Canada passing though British Columbia and Alberta finishing in Banff. The route is 90% off road upon endless miles of dirt and gravel roads and trails and some unmaintained tracks.

As you might expect it’s a little hilly, there is over 200,000 feet that’s 60,000 metres of elevation gain and loss, most of it at high altitudes. There is searing heat to contend with in the deserts of New Mexico, combined with freezing night-time temperatures, it generally rains a lot in the mountains, so all weather conditions are to be expected and its generally unpredictable.

There is a wide variety of landscapes to encounter: dense forests, historic mountain towns, remote mountain wilderness, wild river valleys, grasslands and high desert plains. Along the route the highest point is Indiana Pass in Colorado which is 11,910 ft (3630M)

American wildlife to encounter or avoid include wild dogs in New Mexico and grizzly bears in Montana. We Have Bear Spray!

To make the challenge a little more entertaining I will be doing it on a mountain bike tandem with my pal Sammy – if you haven’t ridden a Tandem they are a fair bit quicker going downhill as long as you don’t crash ( especially with 2 fat lads on one) but considerably slower when going uphill.

Oh- I didn’t mention it, the challenge is self-supported which means we have to carry everything we need with us, intervals for re-supply of food and water can be in excess of 100 miles, overnights are expected mostly to be outside under the stars.

So how long will it take to complete? Well, riders’ average speeds tend to be in the region of 7-9 mph so if we were to manage 100 miles a day then that’s around 12 hours peddling time every day and a finish time of around 27 days.

If you are interested in following us and sharing some of our pain, we will have a spot tracker which will relay our location every 10 minutes, so you can see and keep up with our daily progress or the lack of it!“

Andy and Sammy’s set off last Thursday and are currently around 700 or so miles into their trip across the Tour Divide. They are currently averaging around 100 miles a day, riding in heat of around 40 degrees at altitudes of 6000 ft! ? Water and food shortages have been the main cause of concern so far, with long desolate 40 + mile straights before seeing any form of civilization.  Spirits were high as they reached “Pie Town”, rewarding themselves with a hearty meal, a couple beers and some Wifi (the first chance to touch base in 3 days). ?The next few days sees their route start to climb up through the national forests and some big ol’ Rocky mountain ranges and limited signal!

We will keep you up to date with their whereabouts again in the next few days. If you would like to track them yourself follow the link below:
http://trackleaders.com/tourdivide19i.php?name=Sam_Robinson_Andrew_Castle&fbclid=IwAR3yFYDLn2dKNJi2x8lH2CDAk-TyFFXfx1DEOwS-AeStGjretao2BlBcir4
There is also a link to their just giving page if you would like to donate to their chosen charities:
Just Giving Page: https://uk.virginmoneygiving.com/andrewcastle4tourdivide
Alzheimer’s Society; Prostate Cancer UK & PDSA plus Sammy’s friend’s Children’s Orphanage in Nepal
Lastly, massive thanks to all our brands  and distributors who have helped get Andy and Sammy’s tandem rolling and kit sorted for this amazing adventure: Castelli, Hope, Cannondale, Maxxis, Rholoff, Enve, Thomson, SIS, Assos, Ortlieb, Saddleback, Extra, Lyon Equipment (to name but a few! There are many more!)

We use cookies on our websites. You are free to manage this via your browser setting at any time. To learn more about how we use cookies, and how we store, process and protect your personal information, please see our cookie policy.