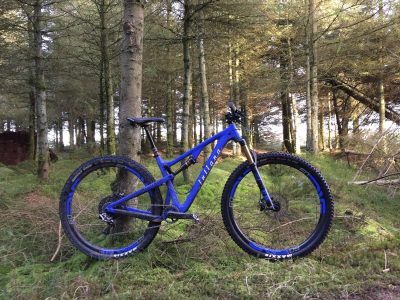 Ever wondered whether an expensive bike is really worth the money? So have I! Having recently purchased a beautiful Juliana Furtado (from £3000 – £5000 price bracket), and invested in their C carbon frame, with S spec build kit, which to me is a pretty ‘posh’ bike (having always ridden aluminium frames), at the back of my mind I had always wondered whether the upgrade to Juliana’s CC frame would have really made that much difference for the extra money?

What does a mountain bike that is within the £5000-£7000 price bracket really feel like? Well, yesterday I got the chance to find out!

We’ve had the fleet of Juliana demo bikes here this week, and as Thursday was such a beautiful sunny Spring day and my day off, I thought it would be rude not to try out the Juliana Joplin 29er, and see how it stacks up. Having only a few hours to spare, I rode it around the black loop at my local trail centre Coed Llandegla, as I thought this was a fair test, having ridden there many times on various bikes and knowing my speed vs effort on most sections.

Well, what did I think? The Juliana Joplin is a stunning bike and so much fun to ride! Having owned a 29er 3 or 4 years ago, but now riding 27.5 wheels, I forgot how 29ers love to eat up the miles, but this still feels like a trail bike. The Joplin CC climbed faster than my Furtado C, frame and wheels feeling stiffer and more responsive, efficiently transferring power from every pedal stroke, and with the benefits of Juliana’s renowned VPP suspension design (I even did some climbs with shock and fork in descend mode – unheard of for me!)  the bike tracked really well, feeling planted and stable on descents, rolling lightly and nimbly over rocks and drops,  rapidly accelerating  due to CC carbon frame, bigger 29er Enve M60 carbon wheels and overall build. Trail handling still felt great and comfortable, and with a slight change in riding style, not at all cumbersome for a female rider of my height and weight (5ft 4/60kg), giving a fun, confidence-inspiring ride.

So, 29er’s only for larger riders? Rubbish! Would I recommend one? Absolutely! If you have the money and want a female-specific fast 29er trail bike, this is it!

“Part endurance racer, part rowdy trail bike—the Joplin is ridiculously fun. The original model redefined what people thought a 29er could be. This latest version breaks the mould all over again.” Juliana Bicycles

We use cookies on our websites. You are free to manage this via your browser setting at any time. To learn more about how we use cookies, and how we store, process and protect your personal information, please see our cookie policy.